Last night, I bought one last Christmas present while shopping at J.C. Penney at the old Washington Mall. I'm pleased to report that there were some Christmas shoppers at Penney's and there were a decent number of cars in the parking lot (in front of the remaining stores). 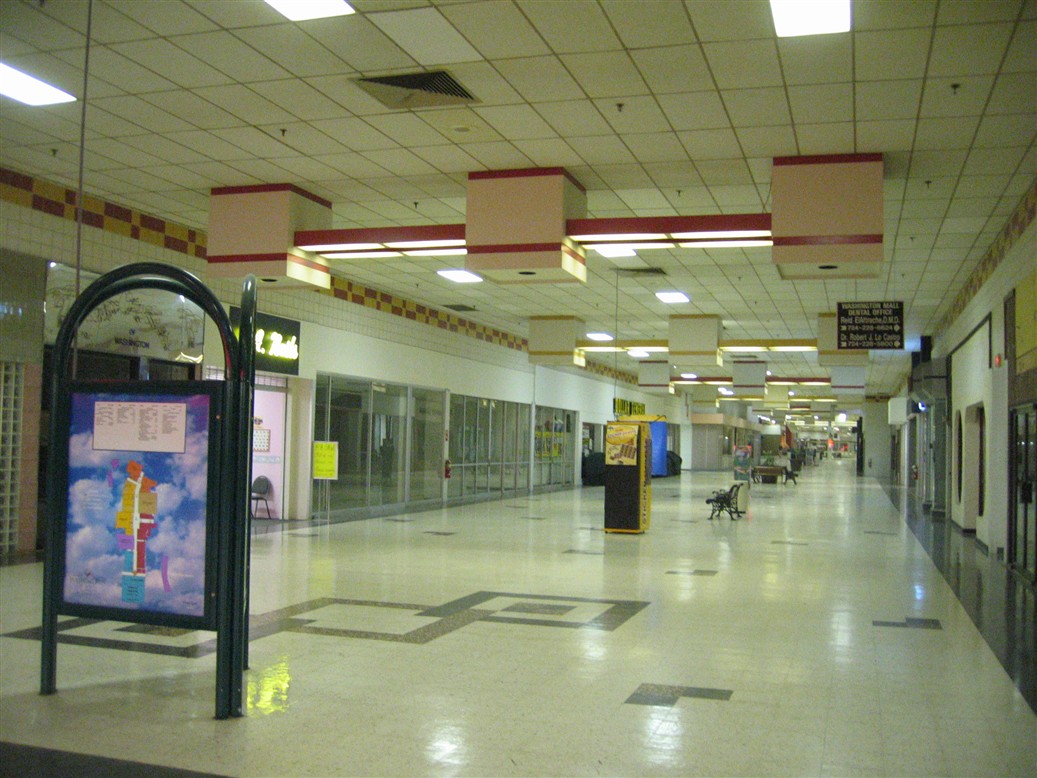 It was good to see activity at the Washington Mall, which these days is usually a ghost town. The mall's wikipedia entry refers to it as "ailing" and notes that Penney's will move in 2007 to a new site less than a mile away.

The photo above of an empty corridor in the Washington Mall is from an article at labelscar.com, "the retail history blog." The article provides background on the mall's demise.

I was once a more frequent shopper at the Washington Mall. As a kid, it's where we went back-to-school shopping. I shopped there when I was first out of college and working in WashPA. But, like others, as so many of the food outlets and stores left the Washington Mall, I found myself headed more often to the other newer retail centers in the vicinity -- as well to Robinson Town Center and The Pointe at North Fayette.

In fact, I only went there last night because I was in the area and wanted to use a Penney's gift card. (I admit it. I was re-gifting. Don't hate me.)

In Washington County, we have many elected officials and bureaucrats (at the county, state and local levels) who talk a good game about economic development projects and all that they have done for job creation... blah...blah...blah...

Here's hoping one of these Masters of the Universe steps forward and pushes/assists the owners of the Mall toward the reinvigoration of this once-vibrant retail hub. It has an excellent location adjacent to I-70 and Route 19. Instead of applauding the development of more green space for new retail activity, why not actively encourage the revitalization of this existing mall?

Speaking of economic development and government officials ... on to the topic du jour in Southwestern Pennsylvania:

Sick of the cheesy carols that dominate so many radio stations this time of year, I was listening to talk radio in the car after leaving the mall.

The show was about the Pennsylvania Gaming Control Board's decision to award the City of Pittsburgh's only stand-alone slots casino license to a location on the North Shore -- and the bleak outlook for the Penguins franchise in Pittsburgh due to the losing bid for the slots parlor attached to a new arena Uptown.

One caller, who identified himself as a union carpenter, said something provocative.

This caller suggested that perhaps there is a behind-the-scenes (and he implied sinister) connection between the award of the license for the "Majestic Star" casino and the construction of the North Shore connector (a the light rail line soon to be built between Downtown Pittsburgh and the North Shore underneath the Allegheny River).