Friday night, the steady and I went to the Cheyenne Jackson and Michael Feinstein "Power of Two" concert at Carnegie Hall. The fine evening of music was filled with ballads from "The Great American Songbook" of the mid-1900s (lots of George Gershwin, Cole Porter, etc.).

One of the tunes performed was "Old Devil Moon" from the 1947 musical "Finian's Rainbow."

For this week's "YouTube clip for a peaceful weekend," here is that song from the show's 2009 Broadway revival (also starring Cheyenne Jackson).

An aside: As a native of Western Pennsylvania, I struggled Friday with how to pronounce the concert venue. Was I at CARN-egie Hall (NY style) or Car-NEY-gie Hall (Pittsburgh/Scotland style)?
Posted by Paul Snatchko at 2:56 PM 1 comments 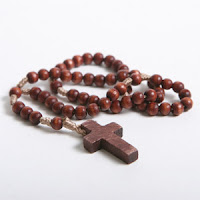 Tuesday night, after work, I went to the Supercuts on University Place for a haircut.

During the wait, I pulled out the October 8 edition of Commonweal. My eyes fell upon an interesting piece called "How to Shut Up" by someone writing under the pseudonym Unagidon. The essay, subtitled "An Old Devotion Quiets A Modern Mind," is about the author's personal experience of praying the Rosary.

It included this great quote from Fr. Herbert McCabe, O.P.:

"Prayer is like love; you won't really begin to understand it until you actually do it."

This weekend, I was in Dallas, Texas, to exhibit for my gig at the University of Dallas Ministry Conference.

It was my second time at this fine gathering of about 4,000 Catholic school teachers, catechists and other parish leaders sponsored by the university, the Diocese of Dallas and the Diocese of Fort Worth.

On Friday evening, I went to Matt Maher's concert at the conference. Among the tunes he performed was his original song "Hold Us Together." Here it is below for this week's "YouTube clip for a peaceful weekend."

Today is the steady's birthday. To celebrate, we went last night to see the acclaimed musical "Next to Normal" on Broadway.

We liked it. The show has a compelling story. I did grow a bit weary of the high-pitched belting – but would recommend it nonetheless.

For this week's "YouTube clip for a peaceful weekend," here is a piece called "A Light in the Dark" from "Next to Normal."

For this week's "YouTube clip for a peaceful weekend," below is the beautiful standard "Autumn in New York."

I've used it before in this space -- and I try not to repeat. But, since it's such an appropriate tune for this time of year, I'll make an exception.

"A soul that is burning with love cannot remain inactive."

For this week's "YouTube clip for a peaceful weekend," here is Perpetuum Jazzile with a fun, jazzy take on "You Are My Sunshine."