Last Monday, November 21, my old friend, Heidi Price Brayer, and her husband, Paul, welcomed their baby daughter into the world.

Adelaide Erica, pictured, weighed in at 8 pounds, 7 ounces. She was 21.5 inches long.

Welcome to the party, little lady!  May God abundantly bless all your days.

In the late '90s, Heidi and I worked together as staff writers at the Observer-Reporter in Washington, PA (my first job out of college). In fact, my first day on the beat, it was Heidi who showed me how to do the evening checks with the local police departments. We've been friends ever since. I have no doubt daughter will be as awesome as mother.

To help celebrate this new arrival, here's Frank Sinatra with a song devoted to another awesome Adelaide, from the Broadway classic "Guys and Dolls":

We recently attended a performance of Philip Glass' 1979-1980 opera "Satyagraha" at the Metropolitan Opera.  Powerful and challenging, it has stirred my interest in Glass and his work.  So, earlier tonight, I poked around YouTube to hear more.

For a belated "YouTube clip for a peaceful weekend," below is a beautiful composition by Glass for the film "The Hours."

A Year in New York

A love letter (in video and with song) to Gotham:


A Year in New York from Andrew Clancy on Vimeo.

I’m writing today while literally “between the ‘burgh and the city.”  I’m on Amtrak’s “Pennsylvanian” from New York’s Penn Station to Downtown Pittsburgh.  At the moment, we are in the woods west of Harrisburg.

I opted for taking the train over flying mostly because of cost. With only a day of lead time, the train was significantly less expensive than a flight on USAirways, JetBlue and the other airlines. Plus, the long train ride across southern Pennsylvania is providing some beautiful views of the fall foliage. 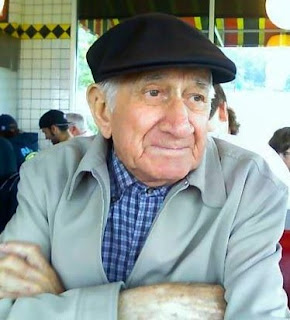 I’m headed to Western Pennsylvania for the funeral of my great-great uncle, Ray Vincenti (pictured).  “Uncle Remo” died Wednesday morning at the age of 95. He was the youngest brother of my maternal great-grandfather, Joseph Vincenti (1908-1983).

Grandpap Vincenti and Uncle Remo’s parents, Dominick and Catherine Vicari Vincenti, immigrated to the United States around 1900.  Dominick originated in northern Italy and Catherine from Austria (although, I believe she too had northern Italian heritage).  Dominic and Catherine had five children in total, four sons and one daughter. Dominic was killed in 1937 in a coal mining accident.

With Uncle Remo’s passing, my family loses one of our last connections to these immigrant ancestors who made the brave decision to come to the United States.

When I ran for the Pennsylvania House of Representatives in 2002, 2004 and 2006, Uncle Remo was a strong supporter. In the 2002 race, he spent the day of the general election speaking on my behalf outside his polling place in the village of Eldersville in Jefferson Township. (We won that precinct that day, too.)

In 2006, Uncle Remo also came to my aid when an opponent issued a piece of literature claiming to be “the only proud Italian” in the race. To help set the record straight, Uncle Remo went with me to a dinner at the Italian Club in the village of Muse in Cecil Township.

He was a good and kind man, and will be missed.  Please keep his wife of 61 years, Della; his daughter, Cathie; his son-in-law, Ken; and his two grandchildren in your prayers.

From the prayers at the end of the funeral Mass:

The photo above is by Ken Havelka.
Posted by Paul Snatchko at 3:53 PM 1 comments