The PS22 Chorus from Staten Island is slated to perform this Sunday at the Oscars ceremony. In honor of the occasion, below is a clip of those famous fifth graders for this week's "YouTube clip for a peaceful weekend."

Joining the chorus on John Lennon's "Imagine" is Ithacapella. 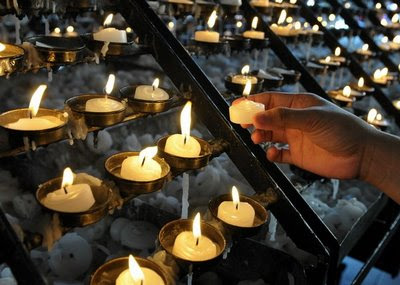 Some church-related food for thought:

"Treat the Catholic Church as divine only and you will stumble over her scandals, her failures and her shortcomings. Treat her as human only and you will be silenced by her miracles, her sanctity and her eternal resurrections. ... "

"Under The Auspices of Liberty" 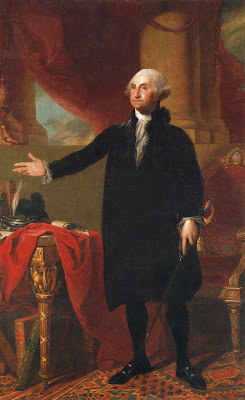 As I write today, the nearby living room television is turned to CNN. The network is showing images from Libya where the people are protesting against a dictator of some 40 years.

"Gaddafi out!" said a protester's sign in one of the shots.

It's ironic this is the leading news on a day when we Americans celebrate the birthday of our first president, George Washington. History reminds us that, after two terms in office, the founding father could have stayed on but freely did not.

This was a blessing to the young American republic. It led to a peaceful transfer of power from one democratically elected leader to another and set the precedent for a calm presidential retirement.

The Arab world needs men and women like George Washington, John Adams, Thomas Jefferson and the rest -- leaders who cherish real democracy and true freedom more than power for themselves and their regimes.

The despots could do well by reading George Washington's Farewell Address.

Here's a piece of that honorable exit:

" ... In looking forward to the moment which is intended to terminate the career of my public life, my feelings do not permit me to suspend the deep acknowledgment of that debt of gratitude which I owe to my beloved country for the many honors it has conferred upon me; still more for the steadfast confidence with which it has supported me; and for the opportunities I have thence enjoyed of manifesting my inviolable attachment, by services faithful and persevering, though in usefulness unequal to my zeal. If benefits have resulted to our country from these services, let it always be remembered to your praise, and as an instructive example in our annals, that under circumstances in which the passions, agitated in every direction, were liable to mislead, amidst appearances sometimes dubious, vicissitudes of fortune often discouraging, in situations in which not unfrequently want of success has countenanced the spirit of criticism, the constancy of your support was the essential prop of the efforts, and a guarantee of the plans by which they were effected.

Profoundly penetrated with this idea, I shall carry it with me to my grave, as a strong incitement to unceasing vows that heaven may continue to you the choicest tokens of its beneficence; that your union and brotherly affection may be perpetual; that the free Constitution, which is the work of your hands, may be sacredly maintained; that its administration in every department may be stamped with wisdom and virtue; that, in fine, the happiness of the people of these States, under the auspices of liberty, may be made complete by so careful a preservation and so prudent a use of this blessing as will acquire to them the glory of recommending it to the applause, the affection, and adoption of every nation which is yet a stranger to it. ... "

The image above, the famous Gilbert Stuart portrait of President Washington saved by Dolley Madison, is from here.
Posted by Paul Snatchko at 5:39 PM 0 comments

It's been a few months since MissBroadwayDork was featured in the "YouTube clip for a peaceful weekend."

And, since it's already Sunday, here she is with "I Don't Know How to Love Him" from "Jesus Christ Superstar."

Out of the haze of a 1970s rock opera, and despite some schmaltz, it's a tune that can speak to our struggle to discern our relationship with God.

The Gifts You Gave

Monday is Saint Valentine's Day. In years past, I haven't been a fan of the Hallmark holiday. But, thanks to the steady, this year is different.

So, for this week's "YouTube clip for a peaceful weekend," below are three clips featuring renditions of the classic love song "The First Time Ever I Saw Your Face."

Later today in Dallas, the Steelers will seek a seventh Superbowl victory.

This week's "YouTube clip for a peaceful weekend" is in solidarity with all of Steeler Nation pulling for a win.

I'm writing tonight from a laptop recharging station near Gate D2 of the Salt Lake City airport. It's about an hour until the Delta red-eye to JFK is scheduled to board.

I paid a first visit to Utah this week to exhibit for my gig at the Southwest Liturgical Conference Study Week.

On Thursday, I visited Temple Square, the headquarters of the Church of Jesus Christ of Latter-Day Saints. I also attended a beautiful Mass at the Cathedral of the Madeleine, the seat of the Catholic bishop of Salt Lake City.

But, for much of the week, I was trying to keep up with the news of the anti-government protests in the cities of Egypt. Sometimes events like this can be pivot points for world history.

Prayers were going up too, of course -- prayers that good, non-violent, democratic leaders will emerge and bring Egypt through a peaceful transition to real democracy and freedom.

Amos Niven Wilder (1895-1993), a New Testament scholar and the brother of Thornton Wilder, once penned a poem saluting the brave among us who risk for a greater good. I hope it's not mawkish to post it here in honor of the Egyptian people:

To those who offer themselves willingly in the day of decision,
In the great arbitrament,
Who are prompt at the gate,
And who present themselves foremost at the fords of Megiddo,
And take their stations at the narrow issues:
Theirs are the great jeopardies, the necessary role,
the memorable name,
Their encounter is with the heart of darkness.

For some the searchings of heart, the scruple, the fastidious witness,
For others the fateful evasion, the abiding reproaches,
For many the frivolous and the usual occasions.
But these on the crumbling levees match themselves with the infuriate flood.

These beneath the waves toil at the primeval sea-walls
Whose courses were laid against chaos.
These repair the moles erected of old against the ravining deep.
These descend where the nethermost piers of history are building,
And place their lives if need be at the foundation of all the ages of glory to come.

From "The Healing of the Waters" published in 1943 by HarperCollins Publishers. The paragraph breaks are mine.

The photo above is credited to Tara Todras-Whitehill/Associated Press.
Posted by Paul Snatchko at 10:56 PM 0 comments