He Opened The Scriptures 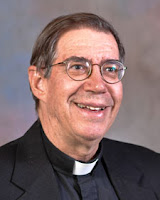 On Wednesday morning, I attended the funeral Mass of Paulist Father Lawrence Boadt at the Church of St. Paul the Apostle on Manhattan's West Side.

Fr. Larry died Saturday, July 24, after a struggle with cancer. He had been a priest for 41 of his 67 years on earth.

Until recently the president and publisher of Paulist Press, Fr. Larry and I met multiple times at the various Catholic conferences I attend for my gig. He also contributed several essays to our 2008 book "Praying with Saint Paul."

Fr. Larry was a noted scripture scholar and author of several books, including the widely-used text "Reading the Old Testament: An Introduction." He also was an active participant in Christian-Jewish dialogue, according a press release today from the Anti-Defamation League.

Fr. Larry's funeral Mass was a fitting tribute to the man.

The scripture readings were taken from Ezekiel; the 2nd Letter of St. Paul to Timothy ("I have competed well; I have finished the race; I have kept the faith."); and the Emmaus story from Gospel of Luke that included the quite appropriate verse:

"Were not our hearts burning (within us) while he spoke to us on the way and opened the scriptures to us?"

For the historical record:

The principal celebrant of the liturgy was the Paulist Fathers' new president, Fr. Michael McGarry. A fine homily on the scripture readings was given by Fr. Michael Kerrigan, who worked with Fr. Larry at Paulist Press.

Bishop Gerald Walsh, an Archdiocese of New York auxiliary bishop and the rector of St. Joseph Seminary, was in choir during the Mass and, near the end, led the prayers of commendation.

The liturgy also included many memorable musical selections. ("Be Not Afraid" was well utilized as an entrance hymn.)

Marty Haugen's setting of the 23rd Psalm was selected for the responsorial psalm. Here it is below in prayer and memoriam:

Posted by Paul Snatchko at 3:19 AM

Rest and peace to Father Boadt and prayers of consolation to all who loved him.

I am in the process of buying one of his books for a class that I am taking this semester.

The liturgy must have been so wonderful; great music. I love the Haugen 23rd Psalm.

"Fr. Larry died Saturday, July 24, after a struggle with cancer." I am astonished by the truth in those words.