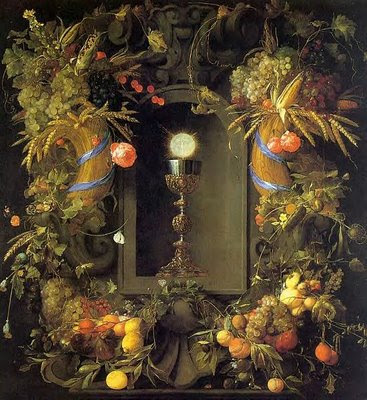 For English-speaking Catholics, the proper name of today's Corpus Christi feast is the Solemnity of the Most Holy Body and Blood of Christ. It's a day set aside to celebrate our belief in the real presence of Jesus Christ in the Eucharist (the bread and wine used during Communion).

The Gospel at Mass today was from Mark Chapter 14:

On the first day of the Feast of Unleavened Bread, when they sacrificed the Passover lamb, Jesus' disciples said to him, "Where do you want us to go and prepare for you to eat the Passover?"

He sent two of his disciples and said to them, "Go into the city and a man will meet you, carrying a jar of water. Follow him. Wherever he enters, say to the master of the house, 'The Teacher says, "Where is my guest room where I may eat the Passover with my disciples?"' Then he will show you a large upper room furnished and ready. Make the preparations for us there."

The disciples then went off, entered the city, and found it just as he had told them; and they prepared the Passover.

While they were eating, he took bread, said the blessing, broke it, gave it to them, and said, "Take it; this is my body."

Then he took a cup, gave thanks, and gave it to them, and they all drank from it.

He said to them, "This is my blood of the covenant, which will be shed for many. Amen, I say to you, I shall not drink again the fruit of the vine until the day when I drink it new in the kingdom of God."

Then, after singing a hymn, they went out to the Mount of Olives.

For good homilies today, be sure to check out A Concord Pastor and Deacon Greg.

I especially appreciated the beginning of Deacon Greg's homily, in which he remembered Dorothy Day's devotion to the Eucharist:

Back in the 1970s, when there was a lot of liturgical innovation going on, Dorothy Day invited a young priest to celebrate mass at the Catholic Worker. He decided to do something that he thought was relevant and hip. He asked Dorothy if she had a coffee cup he could borrow. She found one in the kitchen and brought it to him. And, he took that cup and used it as the chalice to celebrate mass.

When it was over, Dorothy picked up the cup, found a small gardening tool, and went to the backyard. She knelt down, dug a hole, kissed the coffee cup, and buried it in the earth.

With that simple gesture, Dorothy Day showed that she understood something that so many of us today don’t: she knew that Christ was truly present in something as ordinary as a ceramic cup. And that it could never be just a coffee cup again.

She understood the power and reality of His presence in the blessed sacrament.

The photo above shows the 1648 painting "Chalice and Host surrounded by garlands of flowers" by Jan Davidsz de Heem (1606-c. 1683). I found this photo at Idle Specuations.
Posted by Paul Snatchko at 6:10 PM

Thank you for the link